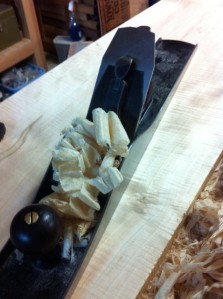 Sometime ago, I added a stanley bailey #8 plane to my arsenal of furniture making tools. I took a risk and purchased it on ebay and then I opted to do a total restoration of the plane. After checking the 24″ long sole with a straight edge, I discovered that the plane had unacceptable concavity between the toe and the heel. Once that was discovered I embarked on the tedious job of flattening a 24″ long sole. My friends, this is not for the faint of heart and it turned out to be a real pain. I used 6 inch wide 80 grit self adhesive backed sandpaper on a 3 foot long piece of float glass that is 3/8 inch thick. As suggested my others, I regularly changed the sandpaper whenever it lost the effective cutting capability. This helped to keep things manageable. Once the bottom of the plate reached sufficient flatness (within a couple thousands of an inch) I switched to the 120 and 220 grits. It probably cost me $40 in sandpaper alone, but heh when you compare the cost of purchasing a brand new one it was worth it. Before this I had flattened a #4 1/2 and a Bedrock 605 and found that to be a lot of work. Now I was a glutton for punishment.

The plane casting was in pretty good shape in terms of having only minor oxidation, but the original paint was beyond hope. Between someone having scratched a large initial and there being a lot of small bare and rusty spots all over, I decided to strip the paint and make it look like new. I applied several coats of satin black Rust-oleum to recreate the look of the original finish. This is not what collectors do because it reduces the value. I obviously did this for my own use and without concern about preserving original paint.

Here is the before and what the plane looks like afterward. I cut a few curls on it and it brought smiles after all the effort of repainting, cleaning the parts of rust, polishing the brass, and the equipping the plane with a new IBC A2 steel plane blade. Thanks for looking.

3 thoughts on “New Life for a Stanley 8 Plane”